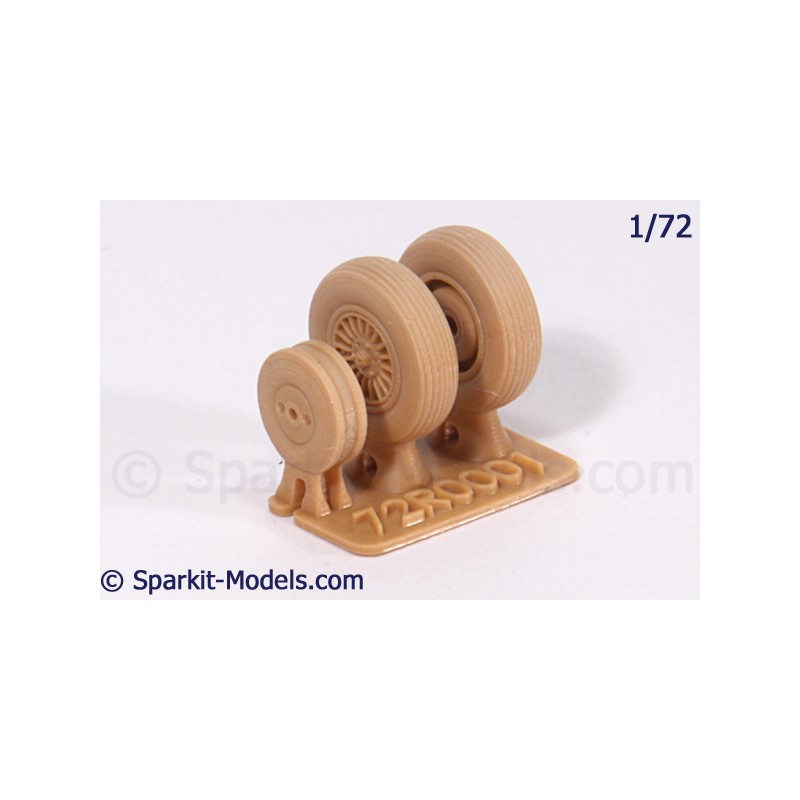 During its long career, the De Havilland Vampire have been fitted with several types of rim. This set represent the late version which can be seen fitted to the single-seater versions starting with the FB.6, like those used by the Switzerland forces, and on all two-seater versions. These wheels were also used on the french-built SNCASE SE535 Mistral. Check your reference pictures, this parts may become usefull!!

The De Havilland Vampire is undoubtedly an important aircraft in military aviation History. Designed during World War II, the DH100 entered service in 1946 and was widely used until 1990. It equiped 28 different country air forces around the world and is still flown by some civilian pilots. During its operational history, many variations were develpped resulting in numerous mofifications including several types of rim. This set represent the late version which can be seen fitted to the single-seater versions starting with the FB.6 and on all two-seater versions. For exemple, the Swiss Air Force aircraft which, were the last Vampires in service, had this type of wheel mounted. During the early 1950s, France produced 250 SNCASE SE535 Mistral. Based on the Vampire, this aircraft mainly differed from the DH100 in haved a Nene engine fitted inplace of the Goblin engine. The late type wheels were also used on the Mistral. Check your reference pictures, this parts may become usefull!!

This item is a scale down reproduction of the late type DH100 Vampire and SE535 Mistral wheels. The smallest details like the number of spokes and the inflation valve have been rendered. This set includes the 2 main wheels and the nose wheel. Tires are realisticaly flatened to the replicate the effect of the weight of the aircraft while on the ground. These parts can be mounted on any Vampire and Mistral kit but, as it was not designed for a specific kit, some adjustment may be necessary to fit properly.